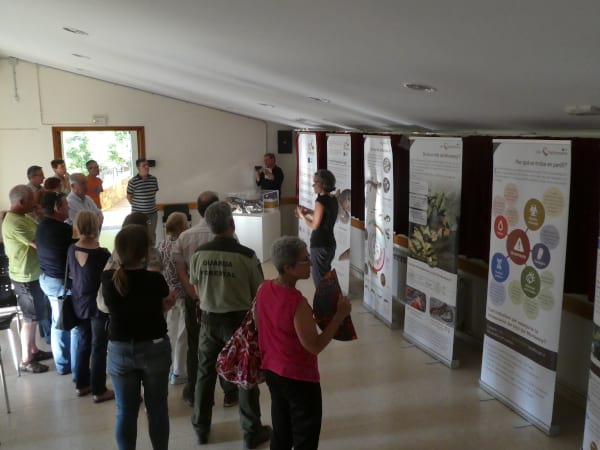 Almost 21,000 people have visited the project's exhibition since its inauguration

Since May 2018, the exhibition "My name is Calotriton and I only live in Montseny" has travelled to different towns and places in Catalonia to show aspects of the biology and ecology of the Montseny newt (Calotriton arnoldi), endemic to the Montseny Natural Park and Biosphere Reserve and considered the most endangered amphibian in Western Europe.

During these three years of itinerancy, a total of 20,712 people have visited the exhibition, which has passed through thirty municipalities in the counties of Girona and Barcelona, including seventeen of the eighteen that make up the Park. With the exception of Sant Feliu de Buixalleu. The COVID-19 pandemic has prevented it from moving for the time being.

"My name is Calotriton and I only live in Montseny" consists of nine roll-up panels with the contents in Catalan and a scale model of a newt from Montseny, accompanied by small panels with texts in Spanish and English. In addition to disseminating the particularities of the amphibian, the actions carried out within the Life Tritó Montseny project to improve its critical state of conservation are also on display.

In parallel, complementary activities related to the exhibition have been carried out, such as conferences, school visits and visits for the general public.

The exhibition is scheduled to start touring again in autumn. It will do so in the municipal libraries of the Maresme region, which are very popular and which will give a new impetus to the dissemination of the reality of the Montseny newt and reach a greater number of visitors.