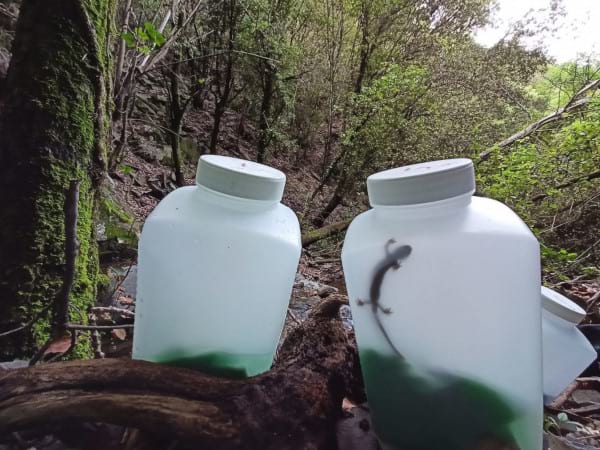 On September 28, the 6th workshop on the reintroduction of the Montseny newt was held

The objectives of the workshop were, on the one hand, to assess the current situation of the populations of this species, both the specimens in the breeding centers and the newts that have been introduced into the Montseny streams so far, and on the other hand, to define the locations of future releases. The action was carried out on March 28 within the framework of action C.15 Identification of potential areas of reintroduction of the Montseny newt of the Life Tritó Montseny project and was attended by hepetologists, scientists and several specialists in the management of wild fauna.

The workshop, which due to the situation by COVID-19 was carried out telematically, began with a brief presentation by Daniel Guinart, from the Montseny Natural Park and Biosphere Reserve, of the current situation and a review of the introduced populations (places, age and number of animals released and current situation). Francesc Carbonell, from the Fauna Center of Torreferrussa - Forestal Catalana, then addressed the current situation of the four breeding centers (number of parents, production, number of animals in breeding and age and condition of the aquariums) and, together with Emilio Valbuena from the Diputación de Barcelona, presented the genetic variability of the released specimens and the animals in breeding for future releases. The session continued with Guinart's explanation of the new introduction torrents and the priorities, costs, current situation and viability. An interesting debate on the future introductions of the Montseny's newt and the strategies that should be followed to value the actions carried out closed the workshop.

The 6th workshop on the reintroduction of the Montseny newt (Calotriton arnoldi) was attended by sixteen people, among whom were renowned hepetologists and scientists and specialists in the field of natural heritage and wildlife management.

Within the framework of the Life Tritó Montseny project and prior to this day, five working sessions had been held in the area of breeding and introduction of the Montseny newt. You can find more information at this link.