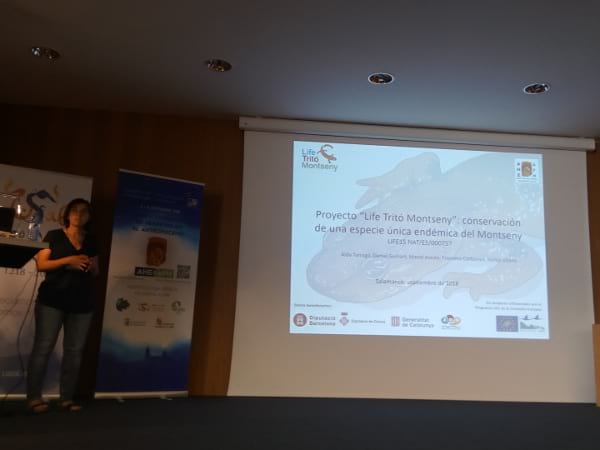 We presented the Life Tritó Montseny project at the XIX Spanish Herpetology Congress, with Aïda Tarragó.

The technicians of the Generalitat de Catalunya considered that it was a good opportunity to spread the Life Tritó Montseny. Aïda Tarragó, a technician from the Department of Territory and Sustainability, travelled to Salamanca to attend this congress and present the project.

The city of Salamanca was selected to organize this new edition for several reasons. One of them is that the University of Salamanca celebrates its VIII Centenary in 2018, so that the city is receiving great media attention and hundreds of international, Ibero-American, European, Iberian and Spanish congresses will be held. Furthermore, it has been an important source of experts and experiences in herpetology for the Iberian Peninsula for decades. This year marks the 31st anniversary of the II AHE Congress (1987), which was already very well attended.

Thus, during the first week of September, the University of Salamanca became a great forum where scientists, conservationists, students and those interested in the world of Iberian herpetology shared their experiences and showed the results of their research. Synergies were sought and new ideas and solutions were brought to the problems dragged along by Iberian herpetes. All united with the objective of the conservation of the herpetes.