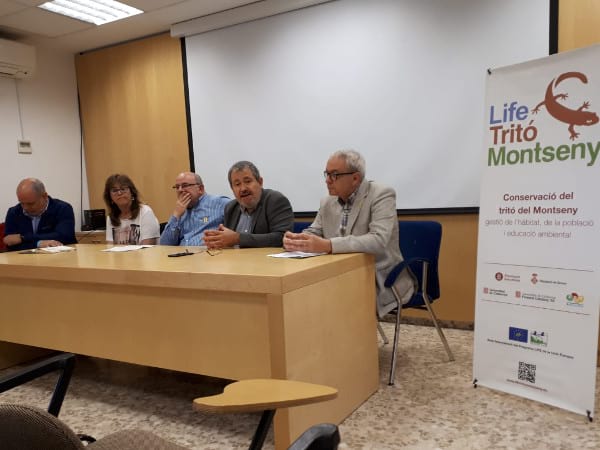 Inauguration of the new installation of Torreferrussa

Torreferrussa threefold the capacity of the installations of breeds in captivity of the triton of the Montseny!

Within the framework of the European project Life Tritó Montseny, the Torreferrussa Wildlife Recovery Centre inaugurated new facilities. The general director of Environmental Policies and Natural Environment, Ferran Miralles; the CEO of Forestal Catalana, Gabriel Esquius; the director of the Barcelona Zoo, Antoni Alarcon; the Coordinator of Natural Spaces of the Diputació de Barcelona, Jordi Padrós; and the technician of the Environmental Service of the Diputació de Girona, Gemma Pascual, visited the new captive breeding facilities of the Montseny newtine (Calotriton Arnoldi).

In this sense, a new room of about 70 m2 has been built, with 240 new aquariums, in addition to the existing installation of about 30 m2, which has 100 more aquariums. This means a threefold increase in existing capacity, as the expansion of space allows new pairs to be generated, laying around 40 eggs a year, of which about 50% thrive.

Work on the new facility began in June 2017. From November to January, the installation of aquariums was carried out, and at the end of March, the transfer of specimens from the existing installation to the new one was started in order to favour new pairings. In order to ensure the adaptation of the specimens to the new aquariums, the transfer was carried out progressively as the water acquired the ecological balance necessary for the success of the operation.

The Torreferrussa Fauna Centre currently houses 900 specimens of Montseny newt of the two existing genetic varieties, the eastern and the western. It has been promoting a captive breeding programme for the endemic species since 2007, and in 2013 it added the Barcelona Zoo, for the captive breeding of the eastern variety, and the Pont de Suert Fauna Centre, to breed the western variation in captivity. Both with specimens from Torreferrussa.

On the other hand, this amphibian also breeds outside Catalonia. Specifically to Chester Zoo, one of the most prestigious in amphibian recovery. Specifically, since April 2017, when the Torreferrussa Fauna Centre ceded 24 specimens to be relocated to a facility with nearly 60 aquariums. The pups born under this program will be reintroduced to the Montseny. The promotion of captive breeding of this endemic species, listed as such since 2005, is one of the objectives of the European project Life Tritó del Montseny.