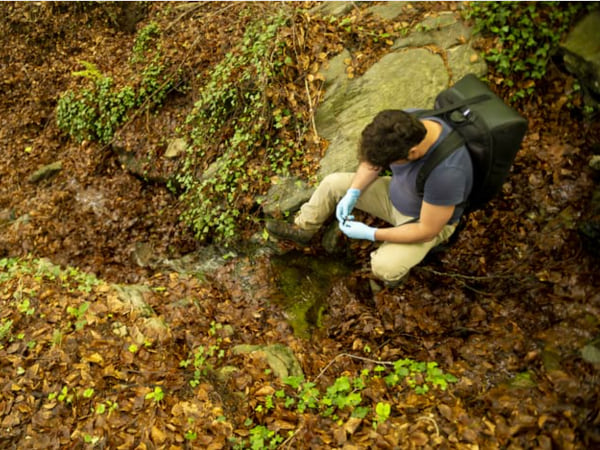 The newt of Montseny in the XVIII Catalan Herpetological Conference

Organized by the Societat Catalana d'Herpetologia (SCH), the XVIII Jornades Herpetologiques took place in Vallbona de les Monges, in Urgell, on 21, 22 and 23 October 2022. The event was addressed to all those interested in amphibians and reptiles, but especially to students, naturalists and scientists and gathered a large number of communications and activities around the herpetological fauna.

Throughout the conference, several oral communications had the Montseny newt (Calotriton arnoldi) as protagonist. Thus, on Saturday afternoon, October 22, a communication on the number of individuals or population size of Montseny newts, one of the most important parameters according to the IUCN to catalog the species within the various categories of threat, was heard. Fèlix Amat, Albert Montori and Daniel Fernández, from the Museum of Natural Sciences of Granollers and CREAC/GRENP, in the presentation -titled "How many newts are there? Estimation of the population size of a critically endangered species, the Montseny newt (Calotriton arnoldi)", the total adult population of Montseny newts was estimated to be between 2,538-2,567 individuals, with data varying in strength between populations (from 18 to 689 individuals).

That same afternoon, "Dispersal capacity of Calotriton arnoldi in an eastern core stream" was also presented by Albert Montori, Daniel Fernández-Guiberteau, Fèlix Amat, Adrià Jordà and Marc Franch, from CREAC/GRENP, Museum of Natural Sciences of Granollers and PECAT Research Group of the University of Girona. The communication dealt with the monitoring of an eastern population using the capture-mark-recapture methodology and the results obtained.

Finally, on Sunday 23 October, in the poster block, Daniel Guinart, Jordina Grau, Sònia Solórzano and Fèlix Amat presented "The LIFE project of the Montseny newt: an opportunity to restore the riparian habitat of Calotriton arnoldi, an endemism of the Montseny". They were able to explain how the results obtained from the interventions carried out (elimination or remodeling of 19 water catchments, conditioning of 10 facilities for the use of rainwater, 26 restorations of the ecological connectivity of streams and 18 forestry interventions to restore the riparian habitat) are quite satisfactory to conclude that the restoration of the Montseny newt habitat is possible.

Another topic presented at the Conference was the "Analysis of emerging ailments of amphibians in 7 parks of the Natural Parks Network of the Diputació de Barcelona". In the communication, held on Saturday morning 22, researchers from CRAC and SCH (Albert Martínez-Silvestre, Alejandro García Salmerón, Eudald Pujol Buxó, Oriol Baena Crespo, Fernando Loras Ortí, Joan Maluquer- Margalef, Barbora Thumsova and Jaime Bosch Pérez) presented the results and conclusions of the health monitoring for the detection of ailments that threaten amphibians carried out in several parks of the Natural Parks Network during the years 2021 and 2022.

"Water storage structures and their impact on wildlife in the Foix and Garraf parks", by Antonio Burguillos Huertas, was the subject of another poster presentation on Sunday 23. In the work, Burguillos carries out a diagnosis of the problems of traditional water storage structures, often abandoned, in the area of the Foix and Garraf parks that act as a death trap for wildlife. It also elaborates a proposal for the management of the detected structures (118 between 2018 and 2021) in which a total of 201 terrestrial vertebrates were found trapped inside.

The main objective of the Catalan Herpetological Conference is to promote the study, knowledge and conservation of herpetological fauna in the Catalan area as well as to help disseminate the work and projects on this type of fauna and stimulate new studies.