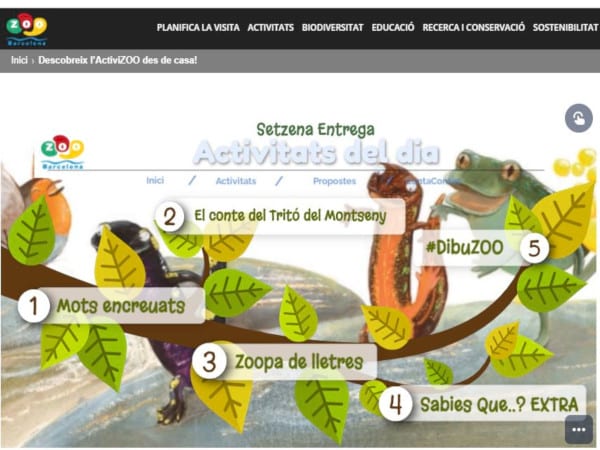 The Barcelona Zoo is stepping in to help families through the months of confinement in an enriching way. In order to continue maintaining contact with the public, it created ActiviZOO, a new section on its website that proposed recreational and educational activities aimed at children and families. As a partner of the Life Tritó Montseny project, one of the protagonists of this initiative was the Montseny newt (Calotriton arnoldi).

The Zoo's social networks did not slow down during the weeks when the facility was closed to the public and continued to share news and information about the animals, fauna and nature in general and, especially, about the nearby biodiversity. The Twitter channel of the Barcelona Zoo has spread several news related to the Montseny's newt: the 3D video by Oriol Massana, the newts seized in a store in Gràcia, the report Cinco Días (RTVE), the commemoration of the European Day of Parks on May 24th and the release of newts on June 23rd.

In spite of the exceptional moment we are living, the Barcelona Zoo, one of the partners of Life Tritó Montseny, intends to resume its activities of spreading the Calotriton arnoldi live, respecting all the necessary security measures.

The main mission of the Zoo is to actively intervene in the conservation, scientific research and dissemination of wildlife and its natural habitats. This task, that is developed in collaboration with other zoos, universities, public administrations, and centers of investigation and conservation, follows the guidelines and strategies established by the World Association of Zoos and Aquariums (WAZA) and the European Association of Zoos and Aquariums (EAZA) and is protected by the legislation, norms and existing recommendations in conservationist matter.