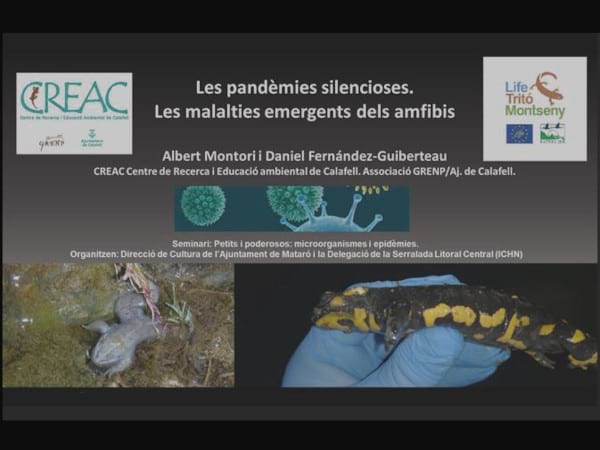 Conference as part of the seminar 'Small and powerful: microorganisms and epidemics'

The Pompeu Fabra Library in Mataró hosted a conference by researchers Albert Montori and Daniel Fernández on silent pandemics and their deadly effect on amphibians. Aware of the enormous risk posed to these animals by the entry of pathogens, in 2020 Montori and Fernández drew up the Manual of good biosecurity practices within the framework of Life Tritó Montseny.

According to 2020 data from the International Union for Conservation of Nature, 41% of known amphibian species worldwide are threatened. One of the main factors behind this situation is infectious diseases caused by fungi, viruses and other pathogens, which can lead to mass die-offs of individuals.

On Thursday 22 April, coinciding with Earth Day, researchers Albert Montori and Daniel Fernández gave a talk at the Pompeu Fabra Library in Mataró on the key issue of emerging amphibian diseases as part of the seminar "Small and powerful: microorganisms and epidemics", which was attended by around thirty people.

Montori specialises in the study of amphibian population ecology and Fernández works on nature conservation projects. Both are part of the Centre for Research and Environmental Education of Calafell (CREAC) and the Research Group of the Escola de Natura de Parets del Vallès (GRENP). The conference was organised by the Directorate of Culture of Mataró City Council and the ICHN Delegation of the Serralada Litoral Central.

The entry of pathogens that cause these deadly diseases is, unfortunately, also a serious threat to the wild populations of the Montseny newt (Calotriton arnoldi), this unique amphibian in the world, catalogued as endangered.

Aware of this fact, in 2020, the Life Tritó Montseny project developed the Manual of good biosecurity practices. Albert Montori and Daniel Fernández prepared the technical content of this publication, which was coordinated by the Montseny Natural Park and Biosphere Reserve. The aim was to disseminate the problems of these ailments and raise awareness among the population so that they can carry out environmental education activities without introducing pathogens into the environment.

Parallel to the Manual, there is the protocol "Biosafety: health protocols for activities involving direct or indirect interaction with amphibian populations in the natural environment", basically aimed at contractors of works and scientific bodies that carry out activities in aquatic environments.