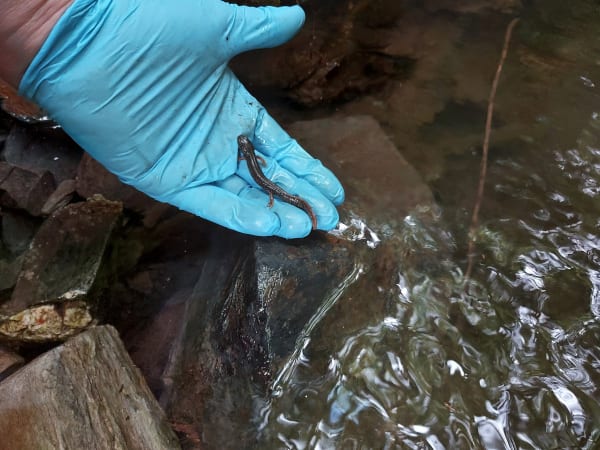 328 specimens of Montseny newts are released in their natural habitat

The constant work of all the breeding centres has made it possible this spring 2021 to reintroduce 60 juveniles and 268 larvae of this species into their natural habitat in different streams. These specimens were born in the breeding centres of the Barcelona Zoo and the Generalitat de Catalunya - the Torreferrussa and Pont de Suert Wildlife Centres.

This reintroduction, which took place in the framework of the Life Tritó Montseny project, was carried out at the end of May and beginning of June, and is in addition to the one carried out last year, in which 235 more individuals were released (see chronicle here), and its success is reflected in the fact that since 2010 almost 1,500 newts have been left in their natural habitat, in six different streams.

The aim of the conservation programme is, on the one hand, to maintain a genetic reservoir in the breeding centres to guarantee the future of the species in the face of the critical situation of the original populations in the wild and, on the other hand, to increase their area of distribution by releasing specimens into new streams. Thanks to this reintroduction programme, free-ranging breeding of the species has multiplied in recent years.

It is also essential to carry out continuous monitoring of the introduced population once they are already living in the wild. These reintroductions involve coordination work between different institutions and scientists, to ensure that the stream where the animals are released meets the requirements of the species, and also to properly select the individuals, ensuring that they have the genetic variability necessary to establish a healthy population.

An endemic amphibian in a situation of extreme vulnerability

The first populations of this species, the only endemic vertebrate in Catalonia, were discovered in 1980 but were attributed to the Pyrenean newt species. Later, in 2005, morphological studies concluded that it is a species in its own right, the Montseny newt, with two subspecies, the eastern and western. The species only lives in a few stretches of 7 streams, which are arranged linearly and do not exceed 3.5 km in length. Therefore, the danger of extinction is very high.

The centres that breed newts, key to their survival

As part of the coordinated work between different institutions to safeguard the species, 2007 saw the start of a captive breeding programme for the species at the Torreferrussa Wildlife Centre, which depends on the Generalitat de Catalunyaa and is located in Santa Perpètua de la Mogoda. In 2013, due to a situation of high vulnerability to problems that the species could suffer in captivity, Barcelona Zoo joined the coordinated breeding programme. Shortly afterwards, a third breeding centre, also belonging to the Generalitat and located in Pont de Suert, joined the programme, as well as Chester Zoo in England.