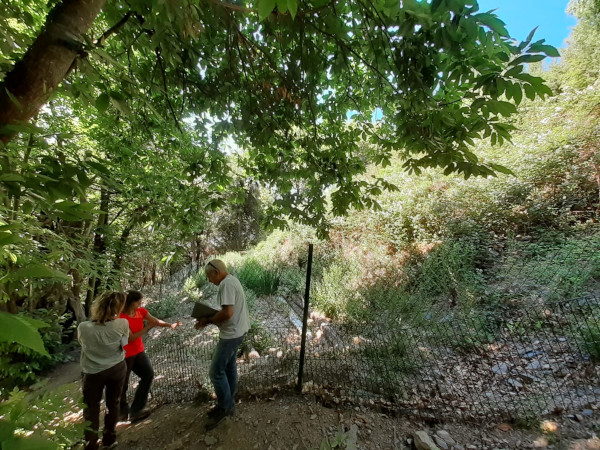 During the month of June, those responsible for Life Tritó Montseny received a visit from Audrey Thenard (CINEA), a monitor from the European Union's external team. The aim of the visit was to monitor the programme and discuss various technical and financial aspects. The Barcelona Provincial Council team leading the project presented the development of the different actions carried out in the territory and the difficulties encountered during its implementation.

On the one hand, on Thursday 2 June, a field trip was made to see the actions carried out in the Montseny area with the aim of improving the riverside habitat of the species. A few days later, on Wednesday 15 June, the technical and financial meeting was held telematically. During the session, details were given of the actions on which the greatest efforts are currently being made to complete them within the project's timeframe.

Thenard's visit will help to define the aspects to be worked on during the last months of the project. The effort of all the people and entities involved in Life Tritó Montseny during these almost six years of the project has been considerable. Now, in the final phase of the programme, work must continue in order to conclude all the planned actions and present the results at the final closing conference of the project.

Life Tritó Montseny began in September 2016 and was scheduled to end in December 2020. At the planned date, the planned objectives had not been achieved and an extension period was granted for 25 actions, 9 of them due to a delay in their execution and the other 16 as a result of the close link with the previous 9. The new end date of the project is 31 December 2022.

The studies and actions carried out within the framework of Life Tritó Montseny with European funding have shown that the situation of this amphibian remains in critical danger of extinction, despite the fact that its population remains stable, especially due to the effect of the hydrology of the area and climate change. The project aims to achieve all the objectives set at the beginning in order to resolve some of the main threats to this endemic species of the Montseny.