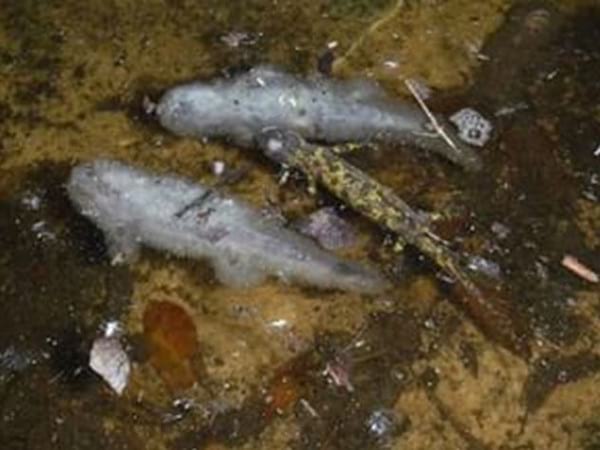 A technical team from the Natural Park of Montnegre and the Corridor with the support of the Servei de Fauna i Flora de la Generalitat de Catalunya, the Grup d'Investigació de l'Escola de Natura de Parets (GRENP), the Institut de Biologia Evolutiva (CSIC-UPF) and the University of Ghent (Belgium) have confined the first outbreak of the chytrid fungus Batrachochytrium salamandrivorans (Bsal) detected in nature in southern Europe.

A scientific article explaining the habitat and amphibian population management carried out in the Natural Park of Montnegre and the Corridor to control the outbreak in Bsal has been published in the journal Conservation Letters. The article demonstrates the lethality of this fungus on native Catalan species such as salamander, green newt and Montseny newt (Calotriton arnoldi) when they are inoculated with spores from Bsal. (See here the scientific article)

The fungus appeared in 2018 in a water point of the Park of El Montnegre i el Corredor and caused great mortality of green newt (Triturus marmoratus). Later, it was also found in some salamander individuals (Salamandra salamandra). The early detection of the outbreak, the collaboration of the scientific world and the management of the habitat have facilitated a rapid intervention to contain this fungal disease.

The technical team has isolated the infected area, managed the affected amphibian population and applied a strict biosecurity protocol. Unfortunately, the disease has been confined, but not eradicated.

Need to restrict trade in amphibians

Despite the European Commission's successful actions to restrict trade in amphibians, European legislation still does not regulate private amphibian collections and the exchanges that these collections can make with each other. The exotic amphibians of private individuals who keep these pets and do not pass any health control can carry pathogens that do not affect these foreign species but, instead, can be carriers of these ailments without symptoms and when they come into contact with native amphibian populations, which are not immunized, they become infected and die.

The study indicates that the intentional release of exotic species into the Park of El Montnegre i el Corredor was probably the cause of the appearance of Bsal. The recently published scientific article shows that the exotic species detected in the water point where the Bsal outbreak was detected survived when they were experimentally incubated with Bsal spores.

Chytridiomycosis is an emerging disease of amphibians caused by the chytrid fungi Batrachochytrium dendrobatidis (Bd) and Batrachochytrium salamandrivorans (Bsal), which can cause the death of anurans and urodelos, i.e. frogs and toads, and newts. Bsal was described in 2013 with one salamander (Salamander salamander) mortality episode in Europe in 2010. Transmission of the two chitridis (Bd and Bsal) occurs through spores that infect the epidermis of amphibians, where they carry out the reproductive phase of the fungal cycle. In many cases, these infections result in the death of the host. In addition, Bsal produces encrusted spores that can remain for a long time in the natural environment without moisture.

As a principle of precaution, when visiting aquatic systems it is necessary to follow the biosafety protocol established by the Servei de Fauna i Flora de la Generalitat de Catalunya, which basically consists of avoiding the manipulation of amphibians and, if they have to be manipulated, having special authorisation for scientific, management or educational capture, disinfecting all material that comes into contact with the aquatic environment (boots, clothing, salabres, among others) before and after the field work and not visiting different water points without prior disinfection.

Since 2018, training actions have been carried out on the biosecurity protocol to prevent the spread of emerging diseases and dissemination actions in the framework of the IV Trobada d'Estudiosos de la Serralada Litoral Central and VIII de El Montnegre i el Corredor held in November 2019 held in November 2019.