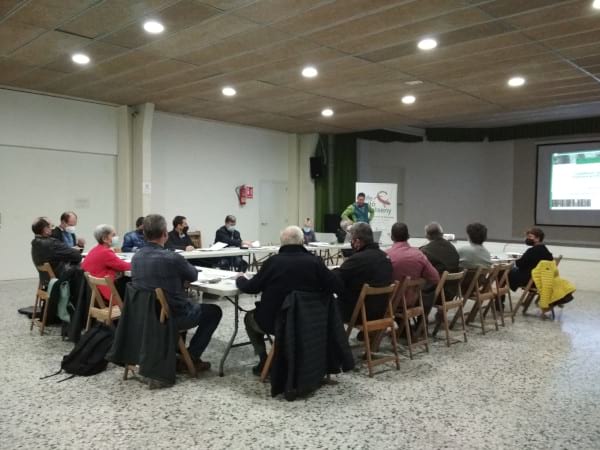 The Local Mariona in Fogars de Montclús hosted a meeting between forest owners and representatives of the different institutions involved in the management of the territory and habitat of the Montseny newt.  The aim of the meeting, held on 18 November, was to promote the application of good management practices to eliminate threats to the Montseny newt, as well as to minimise the effects of climate change.

The agenda addressed the importance of the Montseny newt on a local and global scale, the habitat of the newt and the legal framework associated with its conservation, the protection of the newt and its habitat, proposals for the future and a final debate.

The meeting began with the presentation of the attendees and continued with a brief contextualisation of the Life Tritó Montseny project by Joana Barber, head of the Technical Office of Natural Parks of the Diputació de Barcelona.

Ricard Casanovas, head of the Servei de Fauna i Flora of the Generalitat de Catalunya, stressed the importance of continuing to work on the preservation of endangered species and, specifically, on the importance of the Montseny newt at local and global level. The Generalitat de Catalunya is currently working on the Montseny newt recovery plan, which will incorporate the species' reintroduction plan.

Daniel Guinart, director of the Conservation Programme of the Montseny Natural Park and Biosphere Reserve and technical coordinator of Life Tritó Montseny, explained the strategic lines of the project being worked on for the conservation of the species.

Eulàlia Casas and Alfredo Pérez, from the Agència Catalana de l'Aigua, spoke about the importance of the newt's habitat and the legal framework associated with its conservation. Both focused on water management and the regulations that apply to the territory.

To conclude the presentations, Ricard Farriol, head of the Forest Planning Area of the Centre de la Propietat Forestal de Catalunya, spoke about forest management plans and the co-responsibility of all the agents involved in the conservation of the Montseny newt.

Afterwards, a debate took place among the attendees, in which the actions carried out so far, the concerns that have arisen as a result of the project, the administrative formulas for collaboration and the future lines of work were presented.

In this way, a joint working group formed by the owners and management bodies of the territory was set up to work together to preserve the Montseny newt, both now and in the future.

The meeting was attended by nineteen people, all of them involved in the management of the territory.