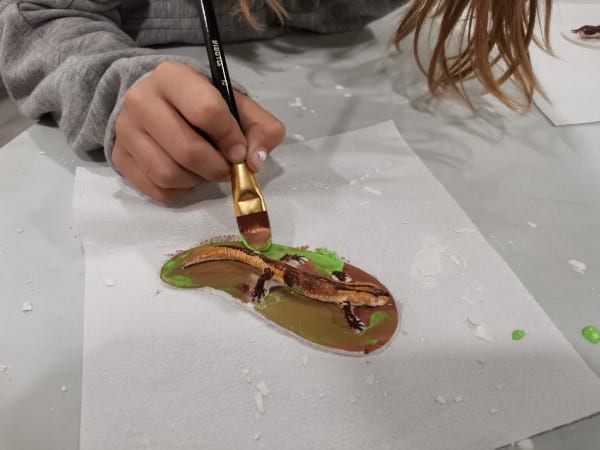 The library Vale of Alfatà of Saint Susanna, at the Maresme, offered the Friday 21 of January a workshop to elaborate tritons of gypsum and announce the morphological characteristics of this endemical species of the massís of the Montseny. The activity, at charge of Ademc, reunited a total of twenty-five persons.

The Vall de Alfatà library in Santa Susanna, in the Maresme region, held a workshop on Friday 21 January to make plaster newts and to explain the morphological characteristics of this endemic species of the Montseny massif. The activity, run by Ademc, brought together a total of twenty-five people.

The participants found the room of the Vall de Alfatà Library in Santa Susanna prepared with the material to make the newts: water, plaster, silicone moulds and paints. First, the children weighed the dry plaster; then they added the right amount of water and, once the mixture was ready, they filled the silicone mould with it.

Filling the silicone mould with the plaster and water mixture. Photo: ADEMC

Once it was dry and out of the mould, each child decided how they wanted to paint it and they could all go home with their decorated Montseny newt.

Painting the Montseny newt is the final phase of the workshop. Photo: ADEMC

The workshop was conducted by Ademc's educators, who thanked the good reception and the lively participation of the families. In total, twenty-five people took part in the activity.