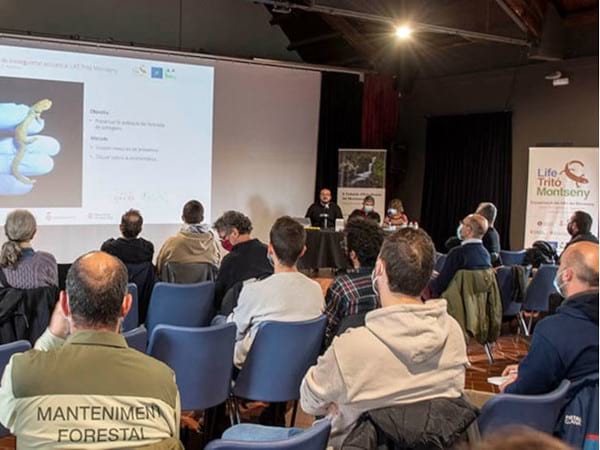 The recovery of the Montseny newt habitat is debated

The X Trobada d'Estudiosos del Montseny, took place on 24 and 25 November 2021 at the "Espai Montseny" in Viladrau. During the morning of the first day, the newt was discussed exclusively.

The survival of the Montseny newt, an endemic species in critical danger of extinction, depends on being able to restore its habitat and find places to make releases with guarantees. This is the main conclusion of the talks on Life Tritó Montseny.

According to Daniel Guinart, conservation technician at the Montseny Natural Park and Biosphere Reserve and technical coordinator of the Life Tritó Montseny project, "There is a very clear consensus that the newt's area of distribution must be extended. We have the specimens to do so because the breeding centres are a success and we have a working group of about twenty people who have reached a consensus on how to make the releases, but the bottleneck is where to make the releases".

Human activity over the last century has led to a deterioration of the newt's riverside habitat and, at present, there are few suitable places where this species can survive. The Life Tritó Montseny project aims to correct this situation, trying to restore the natural environment. "On its own it would be restored, but it would take fifty or a hundred years. The human hand is trying to accelerate the natural restoration of these habitats," explains Guinart.

The Life Tritó Montseny project was due to end in December 2020, but has been extended until December 2022. "The experience of the project is positive because techniques have been used that have not been applied until now in Montseny, which implies a change in traditional ways," says the biologist, who adds that there is a lack of knowledge as to whether it will work. "The consensus of many experts indicates that we are on the right track. The idea is to continue along the lines of forcing the restoration of habitats".

This experience is being incorporated into the Montseny Natural Park and Biosphere Reserve as a new way of working towards real sustainability in the exploitation of natural resources. In this sense, the exploitation of water and wood are the resources that most affect the newt's habitat. Once the Life project ends, the administrations (Diputació de Barcelona, Diputació de Girona, Generalitat de Catalunya and Barcelona Zoo) are committed to continue in this line of work of habitat conservation to extend the distribution area of the Montseny newt.

In relation to the water resources that affect the newt, among others, during the "Trobada d'Estudis del Montseny" the effects of climate change on the massif were also discussed. "Montseny is in a privileged location due to its situation, altitude... it is a small example of what we have in Catalonia, with a Central European ecosystem in the north and a Mediterranean ecosystem in the south, it is an exceptional laboratory to see the effects of climate change, which is why so many studies are being carried out", explains Guinart. In this sense, until now water was only exploited because there was no shortage, but we are already seeing that it is beginning to be scarce in summer, as an effect of climate change. In this sense, the Park believes that it is an opportunity to learn and adapt to climate change. That is why they promote programmes such as Life to encourage adaptation measures to conserve biodiversity and also ensure that people can continue to live from the natural environment in Montseny, a Biosphere Reserve.

After ten editions of the "Trobada d'Estudiosos", robust research and monitoring programmes have been consolidated, which people are already familiar with and there is no need to explain them at conferences. For this reason, this year research and highly specialised work has been presented on delicate species, known as flagship species, which are observed and function as bio-indicators, since their presence indicates the good state of the ecosystem. In this sense, studies have been presented such as the Felis silvestris or the Palinurus elephas of Montseny as well as others focused on habitats of high interest, such as mature forests or natural meadows (such as those located at Matagalls and Turó de l'Hombe). Guinart also warns that in Montseny "there is a lack of species because we do not have in good condition habitats that are vital for the biodiversity of Montseny, such as mature forests and culminating meadows".

On Thursday 25th November, the studies on historical and cultural heritage and geology, which have been less studied by the management of the Natural Park, stand out. In this sense, speaking at the "Trobada d'Estudiosos" is essential to complete all areas of research on the Montseny. Public use and environmental education, as well as flora and vegetation and climatology, were also discussed.

Other topics highlighted in the debate were the effects of climate change on the massif, which are beginning to affect water resources, as well as the presentation of studies on bioindicator species.

The "X Trobada d'Estudiosos del Montseny", in total, has brought together more than one hundred and fifty people. The two days can be followed live on the Youtube channel of the Natural Parks Network.

Since 1986, the year in which the "I Trobada d'Estudiosos del Montseny" was held, nearly four hundred papers have been presented, all of which can be consulted in the collective catalogue.