According to the UICN red list, the Montseny brook newt is a critically endangered species. This implies that there is a high risk of extinction of the species in nature and that a specific conservation strategy must be implemented. Studies conducted in 2007 estimated that the total number of adult individuals did not exceed 1,500 and it was estimated that there had been a 15% decrease in the total population compared to 1995. At the same time, the distribution of the species is not continuous along the river basin, but is separated into two sub-basins isolated from each other and, within which most populations also have mutual isolation. In addition to this, genetic and morphological differences within the species require a management policy aimed at conserving this diversity produced by natural causes. In addition, the Montseny newt is a specialist in torrent life and is therefore very sensitive to environmental changes in its habitat.

There are different threats that directly affect the species at various levels. Global warming is an important long-term problem. The average temperature of the Montseny massif has increased by more than one degree in the last century. This increase in temperature has increased evaporation and evotranspiration of vegetation, which has led to greater environmental dryness. At the same time, the rainfall pattern is more irregular, producing strong spring droughts that are very unfavourable by this strictly aquatic species. The effects of climate change can also be seen in vegetation. Beech forests are very favourable environments for newt, but since 1945 they have climbed at an altitude of 70 metres on average. They have been replaced by holm oaks and are located at an altitude where the small torrents have very little water. At the local level, the drying of small torrents poses the main threat to the species, as a result of the potential overexploitation of aquifers in combination with climatic and forest conditions. Among the other local problems, it is worth highlighting the replacement of the riverbank forest with non-native and fast-growing tree plantations, which produce sediments in the torrents, altering their characteristics.

The serious threat posed by the species forced the development of a conservation programme from 2007 onwards, which has now been reinforced and considerably expanded with the launch of Life Triton Montseny. So far, the conservation programme has consisted of implementing a series of actions to manage populations and their habitats, for example:

-. Monitoring of the state of conservation of their habitat, assessing the importance of negative impacts and designing measures to counteract them.

-. Monitoring of the natural populations of the species with the valuable collaboration of the Rural Agents body to evaluate whether the populations are stable or decreasing.

-. Study of the genetic characteristics of populations in collaboration with the Autonomous University of Barcelona and the Institute of Evolutionary Biology.

-. Diagnosis of the health of populations regarding emerging amphibian diseases, such as chytrid fungus, with the help of the Fauna Recovery Centre of Torreferrussa.

The captive breeding programme initiated in 2007 at the Torreferrussa Wildlife Recovery Centre facilities in Torreferrussa, which has now been extended to include the Barcelona Zoo and the Pont de Suert Wildlife Recovery Centre, is particularly noteworthy. The results have been the adaptation of the species to the captivity and reproduction of individuals, both those from nature and its descendants. This captive population serves as a genetic reserve and of individuals in the event of extinction of populations in their natural environment. At the same time, the surplus of new newts born in captivity has led to the creation of four new populations in the wild in places where the species had not been present, thus increasing the number of individuals and the measure of geographical distribution. 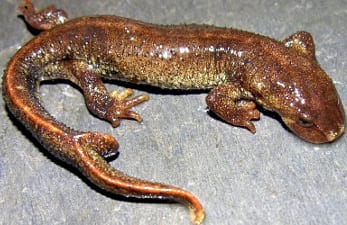