The Montseny brook newt never exceeds 12 cm in total length. It has a small, flattened head, like the rest of the body and has short limbs and cousins. It is possible to distinguish sexes by body shape. Males have a larger and wider head than females and a shorter and taller tail. Females, on the other hand, have an elongated abdomen and a longer tail. The skin of the Montseny newt has black, conical protruding granules. The dorsal coloration is dark brown with chocolate tone. The throat is creamy in tone and the belly has a mosaic of grey dots of varying intensity, with a translucent area of pigmentation burning to the back. Within Montseny, there are differences in body colouring between population groups. In one group of populations, individuals can be found with pale yellow spots on the back and especially on the tail, while in the other group of populations this is never seen and in contrast, males always have a whiteish muzzle. These differences between the two groups of populations also correspond genetically, with an isolation of 500,000 - 250,000 years. The Montseny newt and its closest species, the Pyrenean, coincide on a very general level in terms of morphology and ecology. However, they were isolated 1.5 million years ago when part of the ancestral species' populations were isolated in Montseny to protect themselves from climate change caused by Pleistocene glaciations. From then onwards, the accumulation of genetic and morphological changes and adaptation to the particular environmental conditions of Montseny derived towards their differentiation as a species. 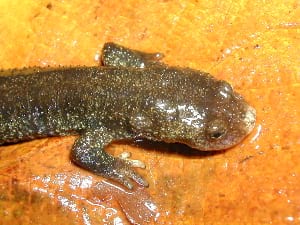