The distribution and the habitat of the Montseny brook newt

This species is not only endemic to the Montseny Massif, but it is also endemic to the torrent system of the Tordera basin. It's only been found in seven torrents. It is divided into two groups of 3 and 4 populations respectively, most of which are isolated from each other. These two groups are separated by the Tordera River, which is a totally unfavourable habitat for the species. The total area of the set of torrents inhabited by the Montseny newt does not total less than 4 linear km and occupies an area of less than 25 km2, with individuals within an interval of 600-1,200 m altitude. The torrents inhabited by the species have a very steep slope and are found on a rocky bed of very cracked rocks. Part of the water flow from the torrents is underground and the rest, especially in the rainy season, emerges forming a series of small waterfalls and rafts. Secondarily, individuals have been found at the head of a stream connected to two streams. The waters inhabited by the Montseny newt are therefore cold, clean and highly oxygenated. The torrents are always found within very well preserved forests of beech forest, holm oak and riparian forest. It shares habitat with two other amphibians: the common salamander and sometimes with the toad. 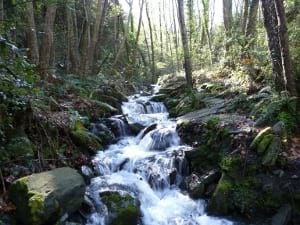