The ecology and biology of the Montseny brook newt

The Montseny brook newt is a specialist in torrent life and for this reason has a number of specific characteristics to live in these habitats. For example, your body is flattened to get better into the cracks, where it takes refuge. At the same time, your granular skin and horny fingernails allow you to attach to cracks. His lungs are atrophied and non-functional. This way it does not float and can move through the rocky bed of the torrents. The consequence of this is that the breathing is done through the skin of the body and mouth. For this reason, it requires highly oxygenated water in order to breathe properly.

The life cycle of the Montseny brook newt consists of the following phases: egg, larvae, young and adult, all of them aquatic. Breeding takes place mainly during the spring but also during autumn. Sexually active males are placed at a point with good visibility and when they detect a female close by the copulate for hours. Its reproduction system is also adapted to this type of life. The high tail of the males serves to embrace the female during intercourse, so that the two genital openings can be connected and the male's sperm pack can be transferred without being lost to the water flow. After fertilization, the females lay their eggs one by one underwater in holes in the rocks, and for this reason their genital opening is at the end of a tubular protrusion. Eggs, with a maximum of 60 per clutch, take several months to open and result in small white larvae that freeze for the first week. These larvae grow and develop over several months until they metamorphose into a young, very similar to adults but smaller and sexually immature. The growth of this young man, after 3 or 4 years, becomes an adult and therefore able to reproduce. The maximum longevity for this species has been estimated at 9 years.

Almost nothing is known about their feeding in the wild, but individuals have been observed introducing the snout into the cracks of the rocks, possibly to catch small invertebrates. It has also been observed that they occasionally catch salamander larvae when they are quite small.

Individuals are particularly active in spring and autumn. During the winter, due to the low temperatures, and in the summer, due to the low flow of the torrents, the newts remain inactive inside the rocky matrix of the torrents. Usually, the activity is nocturnal and only occasionally takes place during the day and in very dark places of the torrents. The most frequently observed behaviour is that of moving slowly or subtracting motionlessly along the rocky channel of the torrent in search of food or to reproduce. When the Montseny's newts are captured, they release a whitish secretion through the skin, sticky and very odorous. 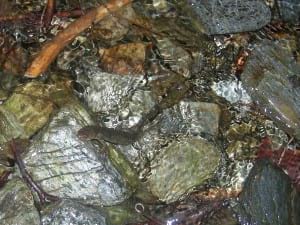