With the title "My name is Calotriton and I only live in Montseny", this exhibition is made up of eight panels and a scale reproduction of the Montseny newt that will help us to get to know this species which is an endemism of the torrents of the Montseny Natural Park and Biosphere Reserve (included in the Natura 2000 Network).

The exhibition will cover, among other places, the eighteen municipalities of the Park.

One of the actions foreseen in this project was the printing of the informative brochure.

Following the design of the exhibition, this new informative material has been published, in digital format and in paper format. 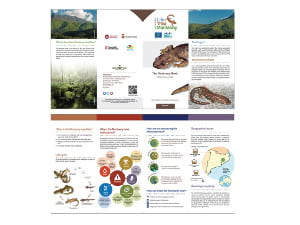 Since this first edition was sold out, Diputació de Barcelona, was responsible for making a second impression, which came to light in January 2019. This second printing has not changed the content of the quadriptych, it has only incorporated a small modification of the design. This time, the following quantities have been published: 6,000 copies in Catalan, 3,000 in Spanish and 1,000 in English.

The quadriptychs can be found in the headquarters of the project partners and in the facilities of the Montseny Natural Park and Biosphere Reserve.

In this way we hope to be able to spread the project as much as possible! 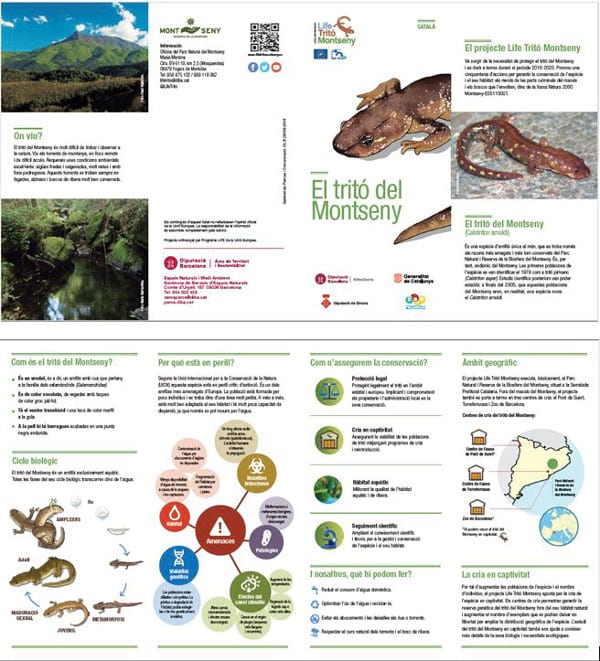 One of the diffusion elements foreseen by the project was the elaboration of the informative panels. These panels contain information about Life Tritón Montseny, the objectives and the actions to be carried out during the four-year duration of the project. They are written in three languages: Catalan, Spanish and English. 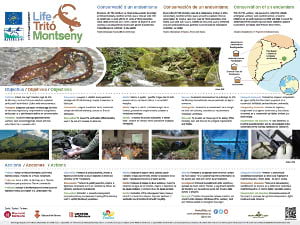 In total, 8 informative panels were designed, measuring 120 x 90 cm. The material of the panels is formed by an aluminium sheet of 3 mm thickness, installed on a wooden support. The printing of the panels was done digitally, in laminate for exteriors and anti-graffiti.

All the panels are installed outdoors, in 8 different places:

The majority of these panels install vertically, except the one of Bridge of Suert and the one of the Zoo of Barcelona, that ubiquen on a support type faristol. 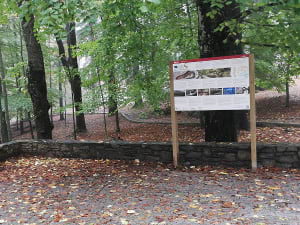 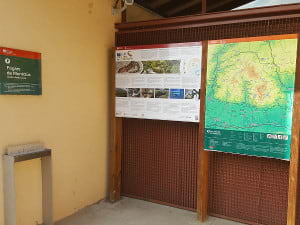 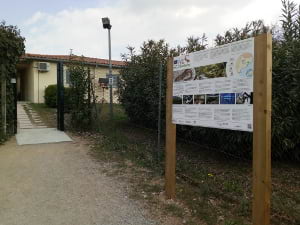 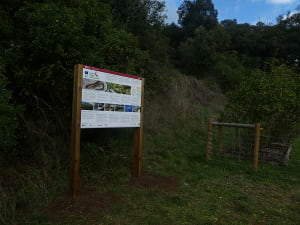 The manual of good practices in biosafety for the discovery of amphibians has been published for environmental education entities, nature schools and educational centers. It aims to disseminate the problem of infectious diseases in amphibians and raise awareness among the population so that they can carry out educational activities without introducing pathogens into the environment.

It is a tool published both in digital and paper format aimed at preventing the transmission of infectious diseases caused by fungi and viruses, which seriously affect many species of this faunistic group.

The document is the result of two working groups organized under the title "Emerging diseases in amphibians: guidelines and biosafety guidelines for educational activities in the aquatic environment of Montseny", in which participated environmental education, conservation and volunteer organizations, as well as educational centers.

The document includes contents such as the measures to be adopted in the discovery of a stream or water point and the handling of amphibians; the protocol for the disinfection of materials for the collection of samples in the field; the sampling equipment necessary to take into account the disinfection of the material, and a section on prevention (malpractice due to ignorance, release of exotic species), among others.

The manual, whose recommendations can be useful both in the Montseny and in any other territory, closes with a decalogue that summarizes what can and cannot be done in relation to the study and handling of amphibians to prevent the transmission of infectious diseases.

The 5,000 printed copies will be distributed among the partners of the Life Tritó Montseny project (Barcelona Provincial Council, which coordinates it, Girona Provincial Council, the Catalan Government, through the Department of Territory and Sustainability and Catalan Forestry, and the Barcelona Zoo), the educational centers of the Natural Park, the environmental education facilities of the territory and the entities participating in the working group.

The protocol "Biosafety: health protocols for activities involving direct or indirect interaction with amphibian populations in the wild" is basically aimed at construction contractors and scientific entities carrying out activities in aquatic environments.

It has been prepared by Daniel Fernández, Albert Montori, Laia Pérez Sorribes and Salvador Carranza, with the collaboration of the staff of the Montnegre Park and Corridor and the Montseny Natural Park and Biosphere Reserve. This is a technical document basically aimed at people who carry out scientific activities in the natural environment.